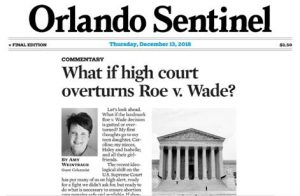 What if Roe v. Wade is overturned?
By Amy Weintraub
Orlando Sentinel
Let’s look ahead. What if the landmark Roe v. Wade decision is gutted or overturned?

Will the Supreme Court Overturn Roe v. Wade After All?
By Louise Melling
New York Times
When the Supreme Court declined on Monday to hear cases brought by Louisiana and Kansas attempting to exclude Planned Parenthood and other abortion providers from their Medicaid programs, legal soothsayers were out in full force opining about what it means for the future of abortion rights under the newly constituted court.

Justices won’t hear states’ appeal over Planned Parenthood
By Mark Sherman
Associated Press
The Supreme Court on Monday avoided a high-profile case by rejecting appeals from Kansas and Louisiana in their effort to strip Medicaid money from Planned Parenthood, over the dissenting votes of three justices.

Research Gaps Leave Doctors Guessing About Treatments For Pregnant Women
By Alison Kodjak
NPR
Jenna Neikirk was nearing the end of her first pregnancy when her blood pressure shot up to dangerous levels.

Zika Cases In Florida At 93 So Far This Year
Staff Report
News Service of Florida
As the end of the year approaches, Florida has reported 93 cases of the mosquito-borne Zika virus in 2018, according to numbers posted Monday on the state Department of Health website.

Five Years Since It Was First Introduced, It’s Time to Renew the New Family Leave Act
By Terri Gerstein
Slate
Five years ago on Wednesday, the Family and Medical Insurance Leave Act of 2013, or FAMILY Act, was first introduced in Congress